Posted on December 27, 2020 by Martina Frammartino

Probably this is my last article for a few days, I have an important deadline for january, 4, but sometimes the judges really inspire me.

This is the national bias of Ayako Shimode in the last 4 years, from the 2016-2017 season, the first in which we know which judge give every mark.

I’ve explained in the past, in Italian, how I’ve do the calculations, perhaps a day I will repeat the explanation in English. Not now, I don’t have the time. (Edit: this is my explanation: https://sportlandiamartina.wordpress.com/national-bias/)

And… I’m sorry for my mistakes and my typos, English isn’t my language and for me to write in English is difficult.

I’ve done this calculations for all the judges. When I will have the time, I will write an article, so you can know all the numbers. I want to ask to the International Olympic Committee to ban of the Olympic Games all the judges incorrect, and a day I will ask to all of you if you want to put your signature on my request. If you know a good way to collect signature, let me know it.

One of the criteria for a ban is a National national bias too high. When a bias is too high? The ISU has suspended Huang Feng after the last Olympic Games for a bias of 8.83 points. For the ISU, it’s too high. So I want to ask to the IOC a ban from the next Olympic Games for all the judges that has a national bias higher than 8.83. But the national bias isn’t the only problem. Judges as Ayako Shimode can’t be detected by this calculation, but Shimode deserves more of a little of attention. Now I don’t watch all the competitions judged by her, I don’t have the time. I will watch only the Men’s Free Skate of the last Japan Championship.

This is Yuzuru Hanyu’s protocol. She was the judge number 2. I’ve circled only the marks done solely by her.

In 6 of 12 technical element her scores were the lowest. In other 5 her scores were the lowest together with the scores of at last one other judge. 11 of 12 elements. Beyond a +2 on the first spin give by judge number 1, she was the only one who give +2, and she didn’t give only one +2, she has given six +2. She has given only two +4. Where? Where the GOEs were almost the lowest, in the step sequence and in the choreo sequence. The jumps?

Let’s remind to her the bullets: 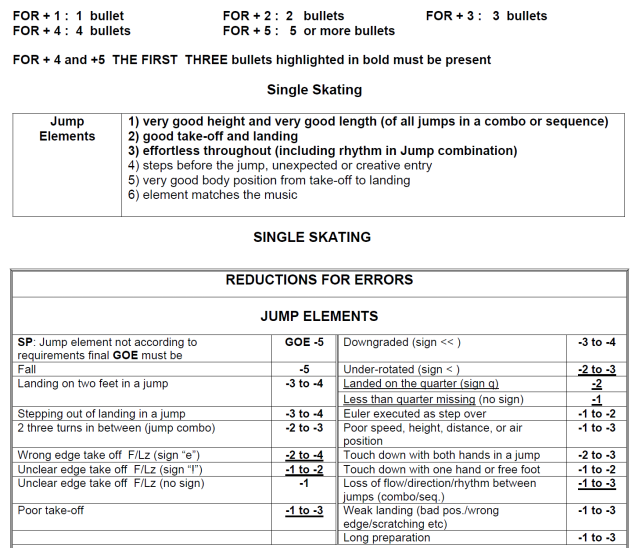 Ok, the 4 loop don’t have the steps, and probably the very good length, even if it’s difficult to have a very good lenght on a quad loop. What about all the other bullets in the first jump, and about all the bullets in the other six element of jump? And there wasn’t any single mistake. Now let’s see the jumps of the other skaters. Shimode hasn’t give a mark higher than +3 to anyone. I’ve written only her +2 or +3.

This time I’ve made my protocol similar to the protocol published by Skating Scores, with all the sums.

In the column E I’ve indicated the GOE if the mark is +1. The numbers are smaller because in the protocols they don’t appear, I’ve used it to make the moltiplications in order to calculate the GOE given by every judge. Shimode wasn’t the only one to give incorrect marks in this protocols, but she was, by a lot, the most severe in the GOEs and in the components, and her severity is only in Hanyu’s score. This is Shoma Uno’s protocol. In the GOEs I’ve circled only the marks done solely by her.

If with Hanyu Shimode has given the lowest marks 6 times, with Uno she has done the same only one time. With Hanyu, her PCS were always lower than the final average, with Uno her PCS were lower in Composition and Interpretation of the Music, the same in Skating Skill and higher in Transitions and Performance. She has lowered Hanyu’s score, but has lifted up Uno’s score.

Worst, she has given 9.25 to Uno in Skating Skills, 9.00 to Hanyu. Since when Uno’s Skating Skills are better than Hanyu’s? She has given at both of them the same mark, 9.50, in Performance. Uno has tripled the third jump, the toe loop, so I’ve watched the remaining part of his performance asking to me if he would forget it and if he would break the Zayak rule. He didn’t break the rule, but he has made only two combinations. In the first one he has fought to do a single toe loop (after the quadruple toe loop) to avoid the repetition of the jump, because he had already done a quadruple toe loop. He somehow managed to do it, but the combination was really of poor quality, with a hand on the ice after the first jump, and the second jump, a single, was downgraded. In the second combination the third jump, the flip, was marked with a q. Only two combination, one a wery ugly combination. How he can deserve the same mark of Hanyu in performance?

This is Yuma Kagiyama’s protocol. 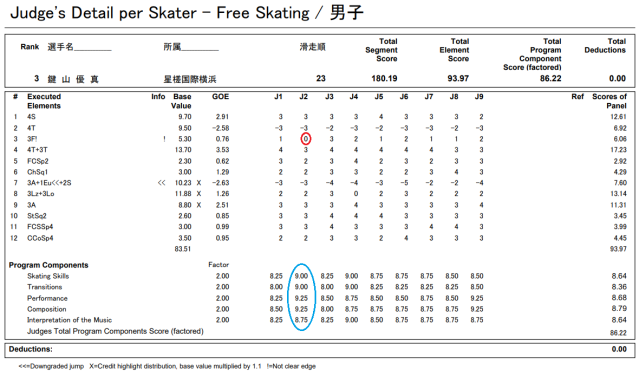 In the GOEs is the same than Uno, only one mark lower than the marks of all the other judges. In the PCS her marks were always above the average. Same Skating Skills as Hanyu. Really?

This is Keiji Tanaka’s protocol:

Ok, I appreciate Tanaka too, but with him she hasn’t given a single mark under the average, and with the PCS was always above the average. Same treatment for all the skaters?

This is Kao Miura’s protocol: 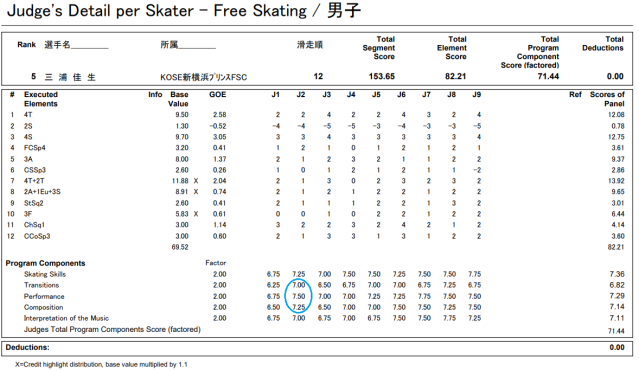 This is Shun Sato’s protocol: 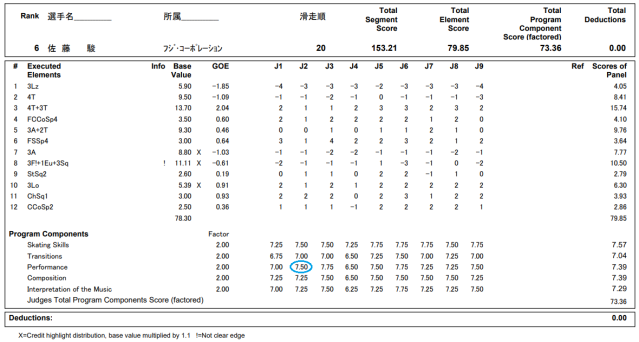 This is Koshiro Shimada protocol’s:

This is Kazuki Tomono’s protocol:

This is Sota Yamamoto’s protocol:

This is Sena Miyake’s protocol:

This is Ryuju Hino’s protocol:

Hino, together with Hanyu, Kousuke Nakano (15° free skate) and Yuto Kishina (19° free skate), is one of the only 4 skater among 24 to whom she has given PCS lower than the average in all the five marks.

Among the 12 GOEs marks for the last 13 skaters, only 7 times (in 156 marks) she has given the lower mark among all judges.

A curious detail is that she wasn’t so severe in the Short Program. That day she was the judge number 9. 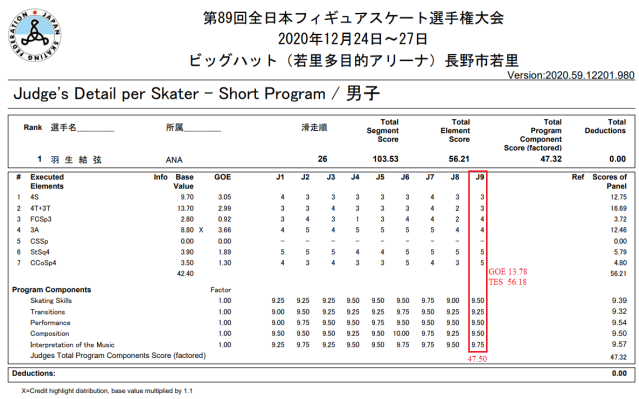 Now I don’t want to talk about the second spin, it’s a long discours and I don’t have the time. And all the judges that gave +4 at that triple Axel (Shizuko Ugaki, Aiko Sasaki, Ritsuko Horiuki and Ayako Shimode) need at least of a new pair of glasses, but probably also of a seminar to learn how to give properly the GOEs. But, besides this considerations, Shimode was in line with the other judges. What may have happened in a night to push her to change so much the way in which her has given her marks? I don’t have an answer, I know that I don’t want to see her in another panel of judges.

This entry was posted in pattinaggio and tagged Ayako Shimode, ISU, JSF. Bookmark the permalink.

This site uses Akismet to reduce spam. Learn how your comment data is processed.